The Caldwell County Courthouse is the third courthouse built on this site. The cornerstone was laid on August 15, 1893 and the building was completed on March 19, 1894. Built by the architectural firm of Martin, Byrnes and Johnston, the structure features mansard roofs and a high central tower with a four way Seth Thomas clock. The three-story edifice is built of Muldoon limestone with red Pecos sandstone trim. Although originally equipped with electricity, the courthouse had no indoor plumbing. Broom closets were later converted into restrooms. It is said that when the first water bill was received, the county judge was so shocked at the charges that he padlocked the restrooms. After a ten year effort involving hundreds of people in the county, a complete historic restoration was completed in the spring of 2000. The courthouse was rededicated in April 2000 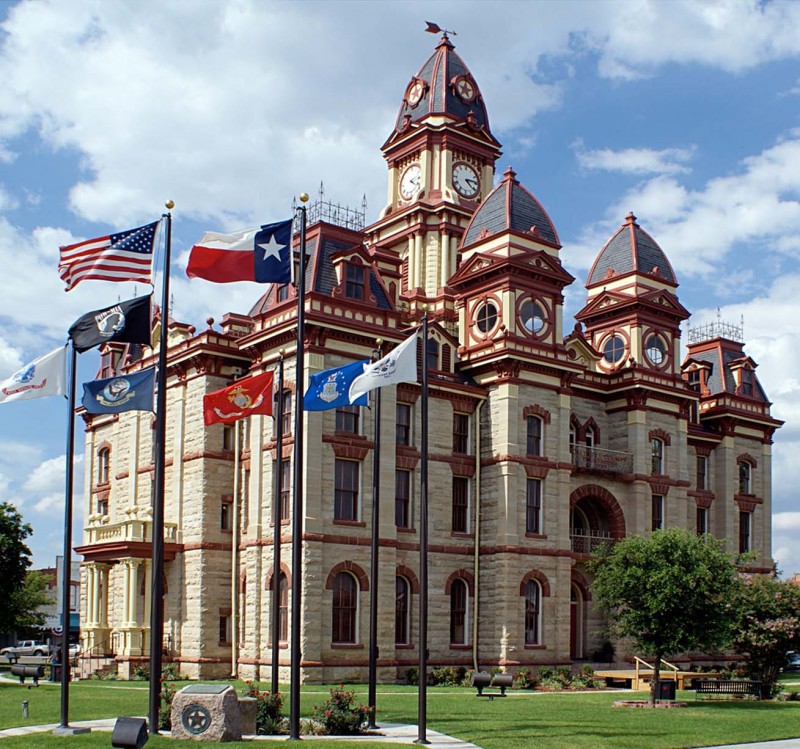 This unique and historically significant building was built with a $10,000 bequest from Dr. Eugene Clark. Dr. Clark was a native of New Orleans, and his father died on the battlefield during the Civil War when Dr. Clark was only three. Mr. Clark's life-long friend E.H Purcell was with him as he lay dying and Mr. Clark requested that Purcell take care of his wife and son. Three years later Mrs. Clark lay on her death-bed. She entrusted the care of her young son to her dearest friend Miss H.M Young. Miss Young raised the boy as if he was her own and Mr. Purcell watched over the progress of the young boy as he grew.

The young Clarkwas a great satisfaction to both Miss Young and Mr. Purcell. He graduated from Tulane Medical School with highest honors and did his residency at Charity Hospital. He graduated in May of 1883 and came to Lockhart. 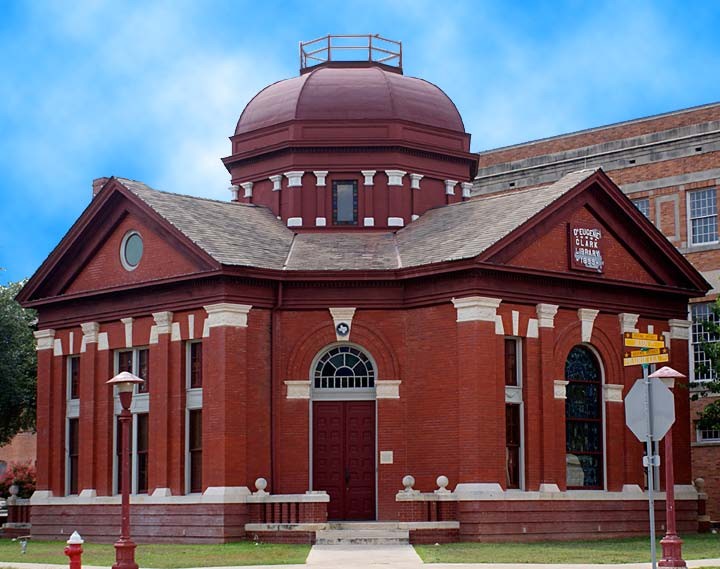 He entered practice with Dr. Lancaster, but Lancaster soon abandoned his practice, leaving the 21 year old Clark to handle the practice alone. He practiced medicine for 13 years in Lockhart and during this time a mutual love between Dr. Clark and the town grew.

In 1896, Dr. Clark left Lockhart to study in London and Vienna. In 1897 he returned to Texas to set up practice in San Antonio in his new specialty -- ear, nose and throat. While practicing in San Antonio, Dr. Clark became very ill. He went to New York for surgery. On his way to New York he came through Lockhart to see his old friends. In New York his condition was pronounced incurable and he left to return to the only home he had known in New Orleans.

On his death bed, with Mr. Purcell and Miss Young by his side he dictated a will specifying that the citizens of Lockhart should have a library and lyceum. His will left $10,000 to the people of Lockhart, of which $6,000 was to be used for construction, $1,000 to buy books and the remainder, was to be put in a trust to maintain the building and purchase new books.

The Library served as cultural center for the city of Lockhart for many years. President William Howard Taft has spoken from the stage in the library and Dorothy Sarnoff has performed here, remarking to her audience, 'If you are bored with my performance tonight, you can just reach over and grab a good book to read.'

Many local community groups and organizations held theatrical productions, recitals and concerts in the library. The Local Community concert group held seasonal programs in the building until 1956. Many local residents fondly recall the days of performing on the stage in the library.

The library is a two story, Greek cross plan and is a Classical Revival building of red brick with limestone trim, with four projecting pediment pavilions forming the arms. The main facade facing east is divided into three bays by pilasters and contains a central stained glass memorial window classically framed by pilasters and a round keystone arch. The southeast entrance has double doors with a mullet-lighted fanlight also framed by pilasters and entablature and supports the central dome.

Inside the building the pressed tin ceiling, woodwork, lighting fixtures and perimeter shelving are all original to the building.

When built, the library had auditorium style seating in the center of the building and on the balcony. In 1956 the seating was removed to allow for the expansion of the book collection.

Today the library continues to serve as a focal point for community activities and is the major source of informational and pleasure reading for Lockhart and Caldwell County residents.

While a historical treasure in the community, the Library operates as a modern, efficient and functioning Library serving the information and recreational needs of Lockhart and Caldwell County citizens. The Library provides the use of six Internet computers as well as public access computers with word processing and printing capabilities. The Library has a multitude of CD-ROM databases to coincide with about 135 magazine/newspaper subscriptions. Today the Library can easily obtain any required book not carried in the existing collection through the use of the Inter-Library Loan.
Click here to view the Dr. Eugene Clark Library's website.

The Brock Cabin was built in 1849-1850 by Andrew Lee Brock and is the oldest wooden structure in Caldwell Co. The cabin was a wedding present to his young bride, Rebecca. When it was built, it sat on 200-acres of property given to the newlyweds by the bride’s father. This property was located 2 miles west of Lockhart on Boggy Creek.

The cabin is a good example of the early architecture that was so common in the central Texas area. It is a log cabin of hand-hewn logs. There are two common rooms across the front with a long shed room across the back. The front has a long galley porch. The kitchen was just out the back door, but not attached to the cabin.

Today, the Brock Cabin is located in Lions Park on S. Colorado/Hwy. 183 just across from HEB Grocery Store. There is an effort to restore this historical structure as both a museum and a teaching tool so that students, area residents and visitors can enjoy and learn about the rich heritage embodied in this dwelling as well as the history of Caldwell County’s pioneering and founding fathers as they lived in the 1850’s. 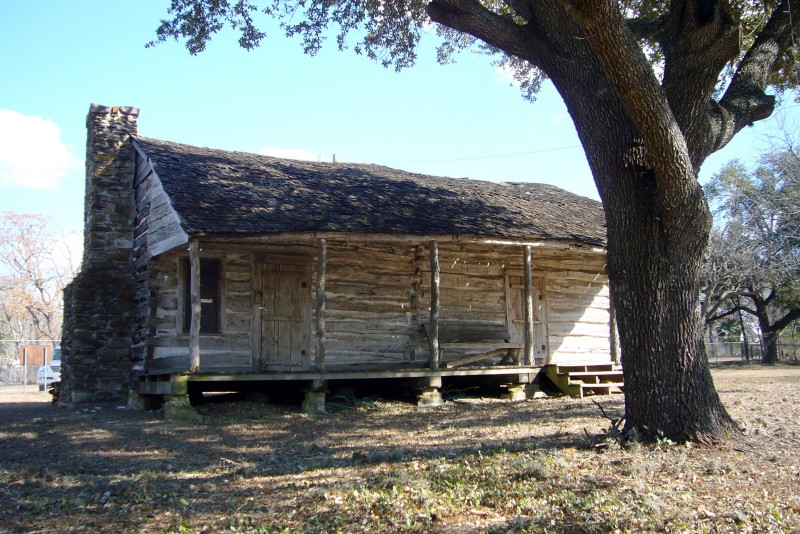 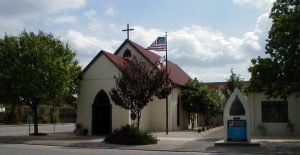 The Emmanuel Episcopal Church was built in 1856 and the sanctuary is one of the more significant church buildings west of the Mississippi. Its structure is the oldest Protestant church building west of the Mississippi in use without major modifications. The Emmanuel congregation organized in 1853 when the Missionary Society of the Episcopal Church of Philadelphia sent the Rev. Joseph Wood Dunn to the Lockhart region. The church met in a school house with its first congregants.

Money was a scarce or non-existent commodity in the 1850’s. Rev. Dunn cast around for inexpensive constructions methods and he and the church members settled on a type of concrete, probably learned from local Mexican-American artisans, of mixing caliche, sand and gravel. The result is a Gothic – Spanish style structure with thick whitewashed walls some two feet thick. Four members of the church agreed to roof the building, if Rev. Dunn would get the walls and windows built. The good preacher had to personally guarantee a $600 advance, and he collected donations from as far away as Philadelphia to repay the note. The church was completed on August 22, 1856 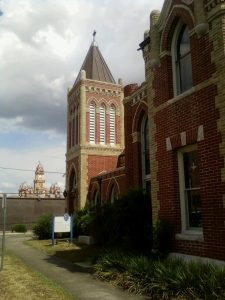 Like many historical churches, First Christian Church began in 1852 not with a building but a belief, and members met in a Masonic Hall. Today the congregation worships in a striking building of deep red bricks and natural stone trim erected in 1898. Tom Hodges, architect for Lockhart's courthouse as well as the town jail and library designed the beautiful church. You can find the church one block west of theCountyCourthouse. 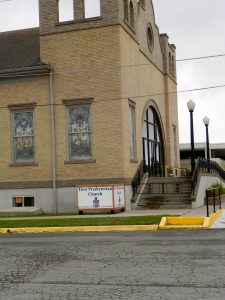 In the 1840's several Presbyterians settle in what would become the town of Lockhart and Caldwell County. Arriving in 1849 via covered wagon with his yound family, Rev. N.P. Charlot appointed Mr. D.M. Morris and Colonel John T. Sotery as elders and along with eight other members organized the First Prebyterian Church.

Lockhart had been established as a town in 1852 and Caldwell a county in 1848. At that time there was no church building in the town, but the small group of Presbyterians made having their own place of worship a priority. They financed the constructed not one but three buildings as they lost one to a cyclone on January 26, 1879, outgrew the replacement, and finally erected a bulding that was completed and dedicated in 1914 in the Central Historic District of Lockhart that holds weekly worship services to this day.

The Baker Theatre opened in October of 1920 as both a silent movie house and a Vaudeville theatre. Through many years and two renovations, the theatre provided quality entertainment to thousands of area residents and visitors. Sadly, in March of 1984 the theatre closed its doors. They remained closed until The Lockhart Community Theatre purchased and began renovating the building in 1997. Since reopening in March of 1998 the Baker Theatre stage has again featured high-quality entertainment. In 2008 the Lockhart Community Theatre and the Gaslight Theatre merged, forming the Gaslight-Baker Theatre, which currently produces seven stage plays each year along with additional special productions, such as musicals and children's programs. To learn more or see what is currently scheduled, please visit the Gaslight-Baker Theatre's website. 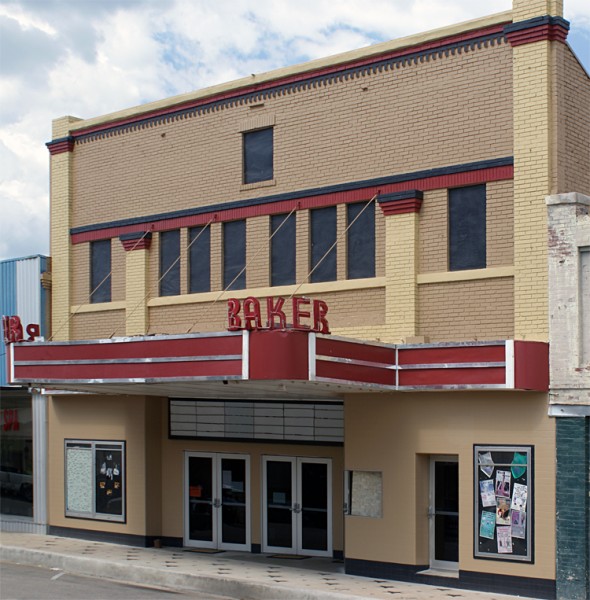 Hometown Cinemas is part of the Lockhart community brings the latest first-run Hollywood movies on six large screens for Lockhart to enjoy at an affordable price in a friendly, welcoming atmosphere. There's No Place LikeHometown Cinema! 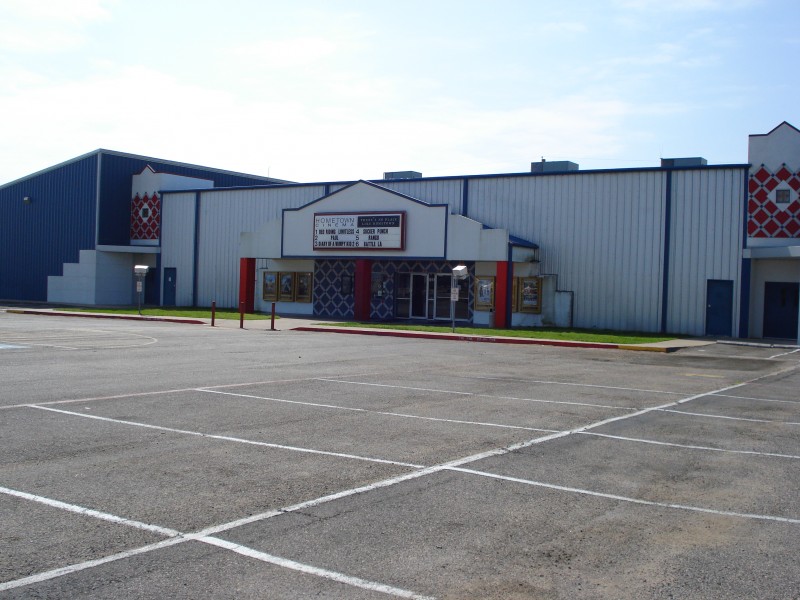 The Caldwell Country Museum building located at 315 E. Market Street was originally built to serve as the fourth jail for Caldwell County in 1908-09. The building represents a rare example of the Norman castellated style of architecture, a popular architectural from for jails of the period and is on the site of the county's first log jail (1855-1858). This five-story red brick structure contains nine main cells, each divided into smaller compartments on the upper three floors. A basement was used for storage and/or solitary confinement and the ground floor was the residence for the County Sheriff.

The jail was use until 1983 and then in 1986 the Caldwell County Historical Commission was given the building for use as a museum. Visitors are encouraged to visit the cells on the 2nd, 3rd, and 4th floors. When you visit you will find low ceilings, shared toilets and sinks, and no air condition. Residents and relatives of residents of Caldwell County have donated many of the artifacts that represent the county’s history for the museum located on the first floor. 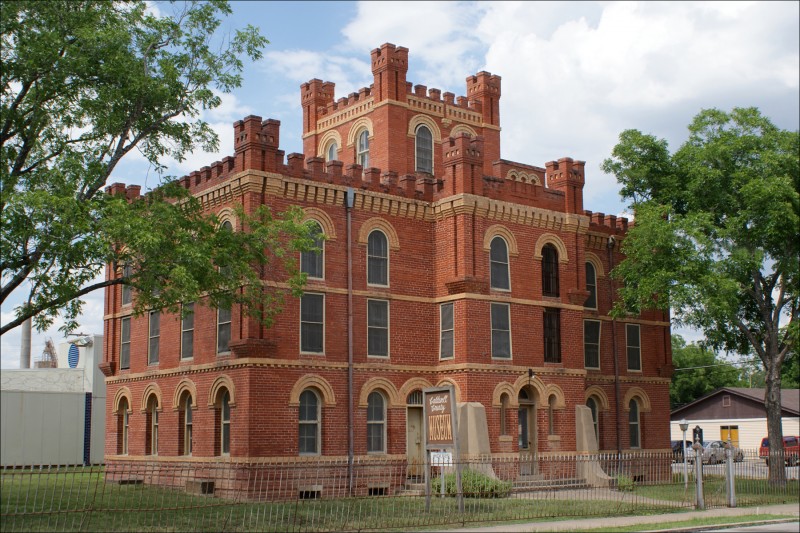 The Caldwell County Museum is operated by the Caldwell County Historical Commission. It is open to the public on Saturdays and Sundays from 1pm to 5pm or by appointment for Tour Groups. Admission is $4 for Adults and $1 for Children. They can be contacted
at 512-398-5796 or at: www.caldwellcountyhistoricalcommission.org.

The Southwest Museum of Clocks & Watches

It all started with a broken clock up a ladder in a tower... The Caldwell County Courthouse underwent a stunning restoration effort by Dale Stahlhut (now deceased) in 1994, but the clock in the tower remained unpredictable, and finally quit altogether.  In 2006, clock restorer Gene Galbraith went to work, and so did the clock.

After opening the tower for a guided tour, Gene and his colleagues in the clock-makers’ world decided Lockhart was the perfect location for a clock museum, ideally on the square in the shadow of the wonderful clock tower.  The only other major museums in the country devoted to clocks and watches are in Columbia, PA, and Bristol, CT.  The Southwest Museum of Clocks and Watches is now a well-known tourist attraction for Lockhart, drawing visitors from all over the world.

In addition to its many attractions, the museum has enacted a Tower Clock Initiative in which its president and volunteers repair defunct Tower Clocks to “like-new” condition throughout Texas and beyond. Time lives on through the Museum! 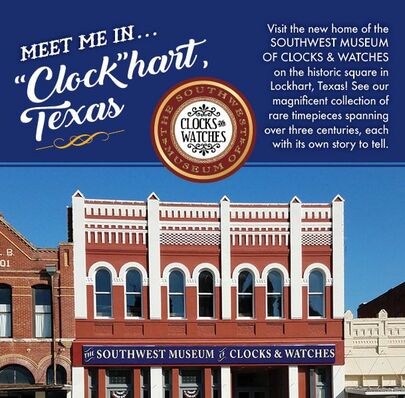